Vivid Machines is the apple of an entrepreneurial eye 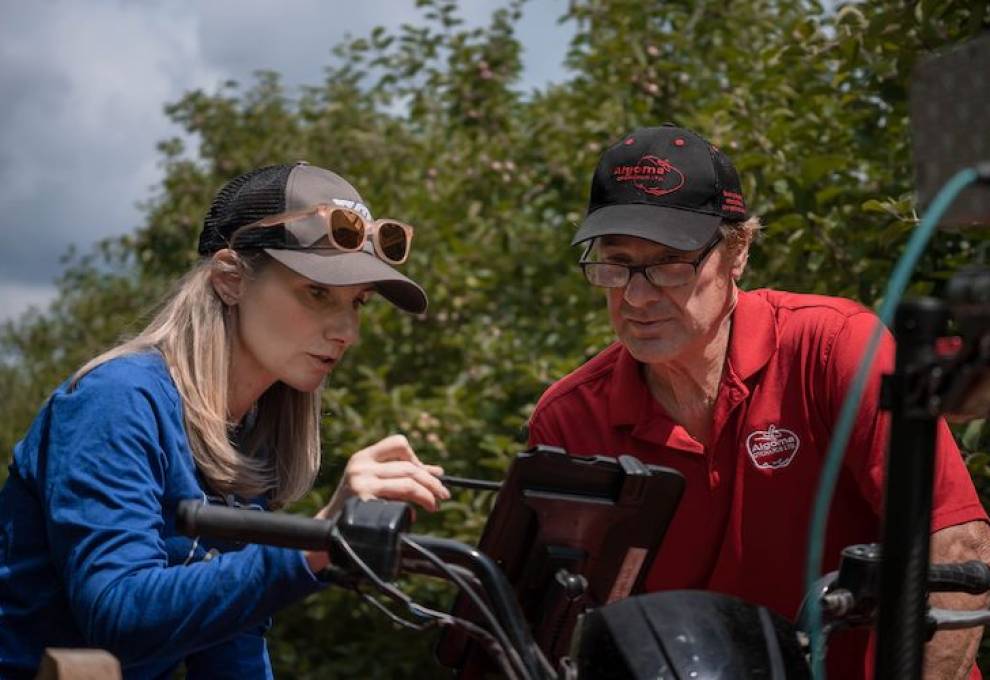 At first skeptical, Kirk Kemp is now a believer that an ATV-mounted camera can count apple fruitlets in an orchard block faster and more accurately than he can. That’s quite an admission for the owner of Algoma Orchards who has several decades of apple harvests under his belt near Newcastle, Ontario.

Ongoing 2022 trials are cementing his trust in sensor technology and machine learning models aimed at reducing labour, and chemical and manual thinning costs. With accuracy averaging 80 per cent across all growth stages and improving every month, Kemp says Vivid Machines technology is close to commercial reality.

“Crop estimates are emotional,” says Kemp, standing in a high-density block of McIntosh apples. “It’s a balancing act that growers weigh every year at blossom time and then at the fruitlet stage. Anything we can do to be more precise in estimating bins per acre is helpful in marketing.”

Vivid Machines Inc., a start-up company that incorporated in November 2020, is piloting its technology with nine growers that span Ontario as well as Washington and New York states. Its rapid progress, despite COVID obstacles, is being driven by co-founder and CEO Jenny Lemieux, a farm-raised executive with a background in engineering, product design and data science.

Lemieux is also a successful graduate of the Entrepreneur First program that matches business trailblazers with like-minded partners to create new tech startups. Entrepreneur First helped her connect with Jonathan Binas, an IT PhD from ETH University in Zurich, Switzerland.

Binas has worked in neuroscience, electronics and was a postdoc at MILA, one of the world’s leading machine learning research institutes in Montreal.That’s where he worked on artificial intelligence, before leaving to become the chief technology officer for Vivid Machines.

Resumés like those of Jenny Lemieux and Jonathan Binas may not be typical of people working in agriculture today, but they represent a new generation of innovators bringing solutions to fruit and vegetable growers.

“Every orchard is unique,” says Lemieux, at ease driving an ATV. “Nothing is heterogeneous and this is an environment where it’s hard to use technology in terms of connectivity and repeatability.”

She goes on to rhyme off all the hurdles that growers know so well:  lighting, row widths, fruit varieties, tree widths.

“Our passion is to solve these really interesting technical problems to help growers,” says Lemieux. “We have built a multi-spectral sensor than can see normal red, blue, green colours into the near infra-red.”

Lemieux explains how technically difficult it is to distinguish green apples from green leaves. The goal is for the camera sensor to count and size the fruitlets, the beginnings of a new crop, so that hand thinning – or chemical thinning -- can remove the heavy crop load and allow remaining apples to size properly. As Kemp shares, long-time apple growers still complain about their imprecision to manage crop loads.

Alternative drone photography doesn’t analyse individual trees in an orchard. As Lemieux points out, drones take fewer photos per row and only provide high/medium/low averages. And operating costs are expected to be comparable. Vivid Machines, on the other hand, integrates its technology into a grower’s normal work flow, mounting the camera on existing farm equipment used to mow or spray. The camera design is proprietary, specifically built to be inexpensive, yet offering up real-time results.

Lemieux and Binas aren’t alone in their drive to commercialization. They are supported by 15 employees and have secured more than $3 million USD in both private investment and government funding. Agriculture and Agri-Food Canada, for example, has announced AgriScience monies of up to $390,000.

For producers, the end game is to more precisely manage the quantity and quality of fruit on every plant. If they can better manage plant growth and predict yield, and diagnose diseases, pests and nutrient deficiencies early, then more fruit will go to market.  Companies such as Canadian-led ecoation and Dutch-led Blue Radix are already working on these issues in the controlled environments of greenhouses. Now Vivid Machines is attempting the same feat in open fields.

The business model for bringing this technology to market is by leasing the camera and selling the prediction software services on a per acre basis. Vivid Machines will release new upgraded predictions each season based on aggregated data. The key point, Lemieux emphasizes, is that growers own the data. She believes that growers will be in a better negotiating position with retailers to deliver quality and quantity of fruit. The Vivid Machines team will be kicking off demonstrations for 2023.

The marriage of all these scientific disciplines is mind-boggling enough. But it’s a special kind of pluck that led Jenny Lemieux to seek out Kirk Kemp.

How did it all get started?

“It was a cold call,” says Kemp. After that, it was just two farmers talking about better solutions.