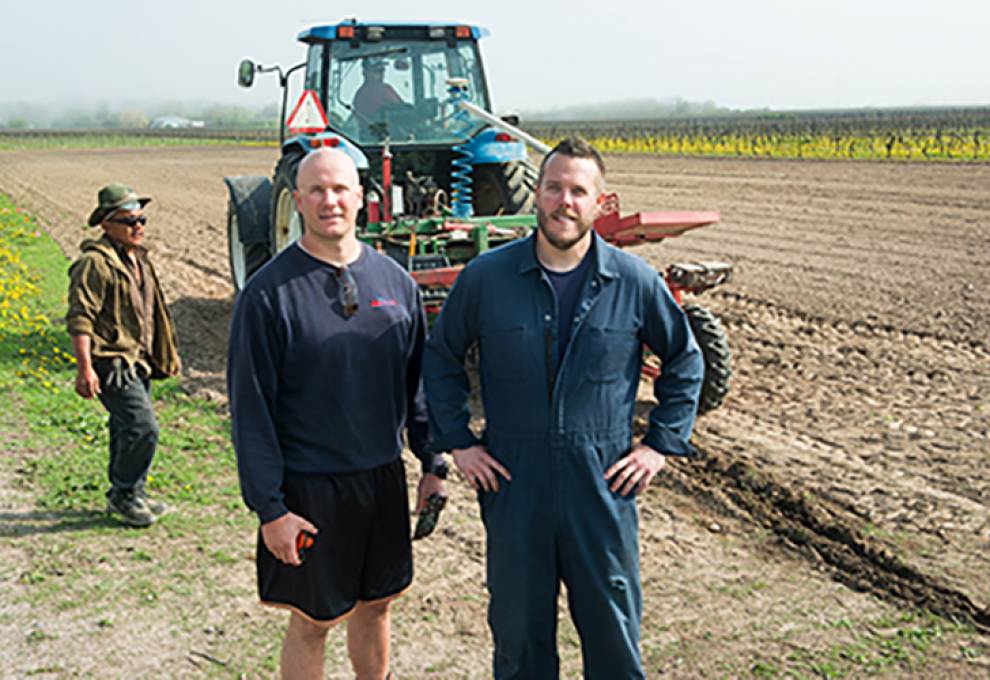 Niagara-on-the-Lake, Ontario – The consumer is always right. That maxim trickles down from the wine store to Constellation Brands to Neumann Farms. A case in point is the planting of Sauvignon Blanc grapes this past spring to serve a forecasted need for this aromatic white.

That is a small percentage of the 225 acres of grapes now under cultivation. As Juan Neumann quips, “We have too many acres in summer and not enough in winter.”

Sons Ryan and Kurt Neumann supervised the rootstock planting against the backdrop of a Chardonnay block which had been hand-planted in the 1970s. These days, they hire the services of a tractor and GPS system to plant straight lines within a centimeter accuracy. It’s important to establish the block accurately so that a mechanical harvester can easily access the vineyard along with other tillage and weed control equipment.

“First we look at the soil type,” says Neumann. “For example, on lighter, more fertile soils we would use a rootstock that is less vigorous and produces a better balanced grapevine. This ultimately leads to better quality fruit and also greater winter hardiness.”

“For varieties that are expected to crop heavier such as Vidal, we would choose a more vigorous rootstock to help support higher yields and larger canopies. We also choose rootstock that is tolerant or resistant to phylloxera, a disease that feeds on grape roots and can be very debilitating to an ungrafted vineyard.”

The 3309 grape rootstock was sourced from Vine Tech Canada. The roots arrived waxed on the top to prevent dehydration. The wax also coats the joint where the graft was made between the scion and the clone. The idea is to protect the roots until they establish in two weeks. Otherwise, the rootstock is susceptible to heat scalding and dehydration.

Photo CUTLINE B: This picture tells a tale of two eras. In the foreground, the new planting is completed with the aid of GPS.  Compare that to the Chardonnay vineyard in the background, a block which was hand-planted in the 1970s.

PHOTO CUTLINE C: Sourced from Vine Tech Canada, these grape rootstocks (3309)  are waxed on the top to prevent dehydration. The wax also coats the joint where the graft was made between the scion and the clone.

Submitted by Karen Davidson on 8 September 2015