Peeling back the plastic from greenhouse cucumbers 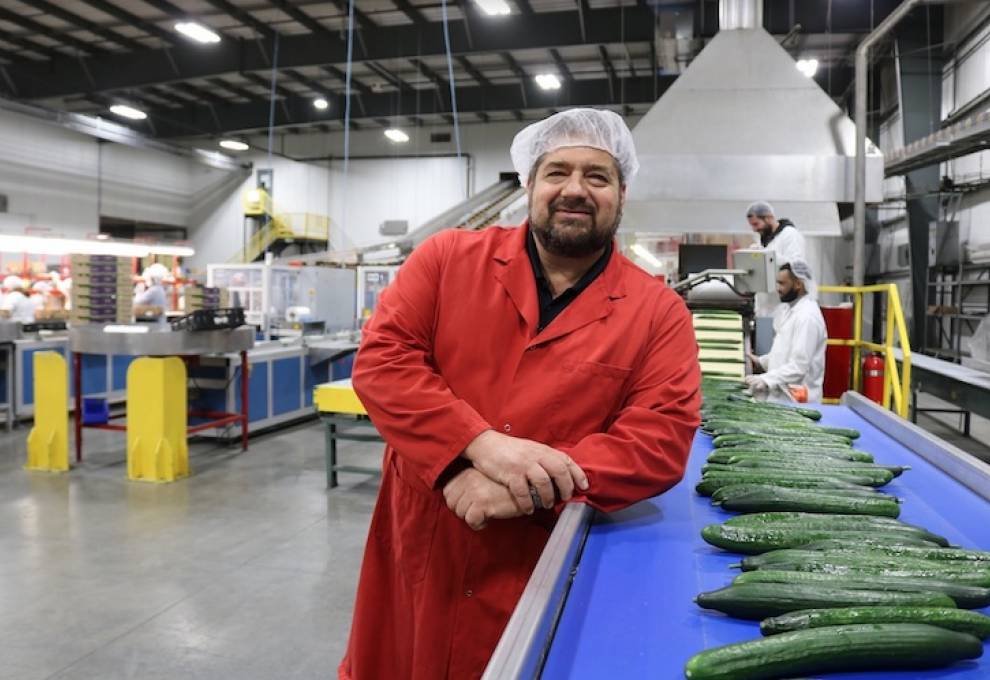 The Canadian Produce Marketing Association’s conference and trade show in Montreal zeroed in on sustainable packaging. One example is plastic-free English cucumbers about to be launched by Westmoreland Topline Farms in mid-June. Dino DiLaudo, vice-president of sales and marketing, is shown overseeing the installation and trialling of the technology in Leamington, Ontario. Photos by Reece Early.
Karen Davidson
-
May 23, 2022

No one is more excited than Dino DiLaudo to be pitching cucumbers free from plastic wrap to retail clients. Based in Leamington, Ontario, Westmoreland Topline Farms is the first in Canada to launch greenhouse-grown cucumbers sprayed with an edible, tasteless protective coating derived from plant material.

It’s all thanks to the technology of Apeel Sciences, headquartered in Goletta, California. Westmoreland Topline Farms has partnered with them for a commercial launch with a major Canadian grocer on June 13. It’s been a five-year journey, partly because of delays from the pandemic, but also due to modifying how the product is applied on greenhouse cucumbers.

“The innovation curve takes time,” explains DiLaudo, vice-president of sales and marketing for Westmoreland Topline Farms. “I first saw the Apeel technology in a trade show booth in Chicago. At that time, the benefit was extended shelf life. But today the benefit is the story about sustainability. It’s about taking millions of pounds of plastic out of the packaging system.”

Privately held, Apeel Sciences has enjoyed a fast track since its proof of concept in 2012. Early on, the company’s researchers identified the lipids and glycerolipids in the peels, seeds and pulp of fruits and vegetables that can keep moisture in and oxygen out. When transformed into a slurry and applied as a thin film, the Apeel coating delays the onset of rot and maintains the cucumber’s firmness and colour.

Because these natural ingredients are lipid-based, not protein-based, there is no threat of allergenicity. These ingredientsare readily available, but the genius is in the proprietary process, the application of the solution in amounts specific to various fruits and vegetables. Once applied, the solution must be invisible and tasteless.

In the case of the English cucumber, the more natural, darker green colour distinguishes it  from its plastic-covered peers. But that’s not the only characteristic that consumers notice. Independent research conducted in May 2021 reveals that consumers associate firmness of English cucumbers directly with freshness. That means no soft spots, no “bendy” cucumbers.  Through in-store pilots, their research also showed that eight days after treatment, Apeel-protected cucumbers have no visible defects. Simply put, they are just as fresh as plastic-wrapped cucumbers.

For Westmoreland Topline Farms, although the American experience looked intriguing, the question to be answered was whether the technology was scalable. At peak production, the Leamington greenhouses are capable of up to 100,000 12-count cases of cucumbers per week. The fortunate intersect was that another Canadian-owned company, Houweling’s, had tested the Apeel process on cucumbers in its California greenhouses. In 2021, DiLaudo evaluated the application process in California, requested a few tweaks, then signed a letter of agreement. As it subsequently turned out, Westmoreland was able to acquire and refurbish the Houweling’s equipment for its own use.

An Apeel team is currently in Leamington installing equipment and supervising trial applications. As DiLaudo explains, “The proprietary powder is reconstituted with water, mixed in stainless steel vats under temperature control and then sprayed and dried on a conveyor line.”

Once the Apeel-protected cucumber leaves the greenhouse, the journey to market is really only half-complete. There’s a possibility that consumers may question the food safety of supermarket cucumbers that are not wrapped in a plastic sleeve. That’s where Apeel provides its expertise gained with American consumers.

“We have conducted quantitative research and in-home user testing with consumers in the United States and Canada to understand consumer sentiment and acceptability towards a plastic-free cucumber,” says Ravi Jolly, vice-president of new products at Apeel.

He says that more than 80 per cent of 800 American and Canadian surveyed consumers stated a preference for purchasing an English cucumber without plastic wrap in lieu of a cucumber wrapped in plastic. Furthermore, he says that educating consumers on the benefits of a plastic-free cucumber is critical to increasing not only comfort, but interest.

“When we exposed consumers to multiple messages in testing, we found that 75 per cent of consumers stated a likelihood to purchase after learning more about the benefits of a plastic-free cucumber.”

Walmart, for example, launched its plastic-free cucumbers two years ago. So Apeel provides its consumer-smart messaging “protected by nature” and a social media campaign. A QR code on the package directs consumers to a website dedicated to most frequently asked questions.

“Is Apeel a chemical? Yes! Everything you eat and drink is made of chemicals, from caffeine (C8H10N4O2) to water (H2O) to the beta carotene found in fruits and vegetables (C40H56). At Apeel, we take chemicals that exist in nature and turn them into a biotechnology that keeps produce fresh.”

Apeel’s Ravi Jolly says that education, using existing training platforms, hosting webinars and even in-store events, is a must to ensure store teams support the product.

“We agree that it’s critical for the store team and consumers to understand the benefits of cucumbers that are protected by plants instead of plastic,” says Jolly. “That’s why we recommend to our retailers that we also communicate directly with consumers at shelf and through their communications channels.”

The timing of the Westmoreland Topline Farms’ launch comes at a most interesting intersect, coming out of the pandemic. The question is whether consumers are willing to put aside their food safety concerns in favour of an environmentally-friendly sleeveless cucumber. Or do they have further questions, such as what exactly is in the spray?

Plenty of fruits and vegetables get sold without plastic, answers Jolly.

“The use of plastic for cucumbers is to maintain shelf life, not as a safety precaution,” he says. Apeel plays the same role of maintaining shelf life.

“We did consumer research around plastic usage and preference throughout the early days of the pandemic,” says Jolly. “We saw a preference for packaged produce drop down after initial spikes, and more than 60 per cent of consumers expressed their frustration by the overuse of plastic wrap and packaging on produce.”

The Canadian Produce Marketing Association (CPMA) has taken a lead role on the plastics file.

“Innovation is fundamental in our work to reduce problematic materials in our packaging for fresh produce,” says Ron Lemaire, president, CPMA. “To meet the targets of the government and the Canada Plastics Pact, our sector will need to embrace a range of tools and strategies that support the reduction of plastics and new systems to manage circularity.”

Westmoreland Topline’s sleeveless English cucumber is completely undressed for the salad days ahead and their process is ready to meet the demand with capacity for 20,000 12-count cases of  Apeel-protected cucumbers per week.