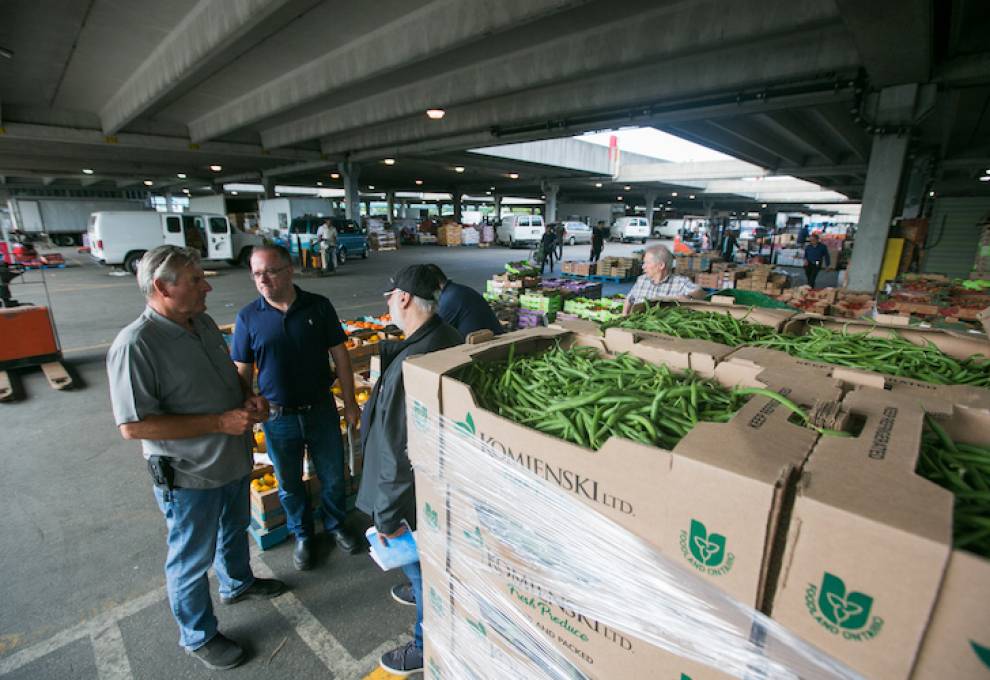 Plus ça change. The French say – preferably over a beverage – that the more things change, the more they stay the same.

Tom Komienski, a veteran produce seller at the Ontario Food Terminal (OFT), could easily argue the point that local produce has never meant so much to so many. He’s standing beside boxes brimming with beans, a standard for July. The human impulse for the season’s just-picked never changes. There’s always demand for the al dente tenderness of a locally-grown green bean.

His family has been meeting those needs since 1952, growing Norfolk County vegetables. That 70-year arc of history now includes a world pandemic and that’s prompted changes in farm operations and retailer buying strategies.

“I think there’s a renewed energy to get back to normal,” says Komienski. “The restaurant trade is coming back, looking for that feature ingredient to make an asparagus soup, for example. Most growers are optimistic except for the rising production costs of fuel, fertilizer and containers.”

Normal does not mean status quo. Near Scotland, Ontario, the home farm is now growing more than a thousand acres of vegetables as varied as asparagus, beans, peppers, sweet corn, tomatoes, pumpkins and squash. This is the first year to market organic asparagus. And Komienski notes that independent green grocers-- East Indian, Asian and Arab --are all looking to fill their niche.

“I like to think that we can bring back this notion to consumers that eating seasonally is best,” says Komienski. “Roadside markets have never been more popular.”

The Komienski family has invested its future in much more than a roadside stand, building Sam’s Place Farm Market.  Their on-farm market now has a steady clientele for the farm’s produce as well as those of neighbours. Honey, jams, preserves and pickles crowd the shelves. The twist is that this farm market has a garden centre that appeals to those with a green thumb.

For Giancarlo Trimarchi, his memories of the Ontario Food Terminal hark back to his childhood. His father Carman has been a buyer since 1979, and to this day, still inhabits the warrens of the most dynamic produce market in Canada.

“This is a very demanding place to be,” says Trimarchi, partner, Vince’s Markets with stores in the Greater Toronto Area including Sharon, Newmarket, Uxbridge and Tottenham. “It’s the purest form of economics that exists with supply and demand dictating the price of the day.”

During July and August, Trimarchi says 75 per cent of the produce on offer in their stores is Ontario-grown. With ever-increasing costs of production, it’s a constant effort to keep equilibrium between quality and price. There are no long-term contracts with suppliers.

“It’s a mixture of the long-term game with our suppliers,” says Trimarchi. “We may shave off a little (in price) now to pick up more later.”

“The pandemic showed us that the market will supply us,” says Trimarchi. “Prices are so volatile that we’re more content to pay as we go.”

One strategic change has evolved in recent months and that’s the use of more cross-docking.

“These fuel costs have forced us to look more closely at logistics,” Trimarchi explains, “because they have impacted costs of produce. One way to negotiate with a vendor is to coordinate trailers that go directly from the Holland Marsh, for example, to a store in Newmarket. Then one of our refrigerated trucks can distribute to the rest of our stores.”

Vince’s Markets employed a pump-the-market strategy for field-grown strawberries for Father’s Day. The weekly flyer promoted Ontario-grown strawberries at $3.99/quart for the weekend, but clearly stated that the price would move to $4.99/quart until the end of June.

Those strawberries originated from Shabatura Produce, another Norfolk County grower who ships to the Ontario Food Terminal. What’s evolved is the traceability of the seasonal fruit with corrugated masters that communicate not only the date packed but the Croptracker symbol.

Why does the Croptracker logo and a QR code matter? Eric Chanyi, vice-president of Shabatura Produce, explains, “This is an excellent tool for food safety and customer service.”

The software management program has been used for three years now, allowing pickers to scan their identification codes with each box of strawberries delivered to the field manager. At that point, a sticky label is generated with a QR code that identifies the picker, the field and the date picked. The data is stored in the Cloud with a unique number. If the buyer has an issue – for example green strawberries on the bottom and red  strawberries on the top --  Chanyi can doublecheck the precise circumstances and resolve the dispute quickly.

The Croptracker program is so robust that Chanyi can tell the story of a single box of Shabatura Produce strawberries to buyers such as Carman Trimarchi.

Coming out of the pandemic, Giancarlo Trimarchi says that some changes such as logistics have been fast-tracked, but sidelined others such as packaging.

“COVID-19 took us off the path to more sustainable packaging,” he says. “We used more plastic to create a food safety barrier.  Our clientele do call us out on packaging but the challenge for a smaller independent grocer is to source packaging at a reasonable cost. We’re not ready to pay triple the price.”

Compostable trays seem to be an option.  But in the environment of rising costs of all operational inputs, this will be flagged for future consideration.

At first glance, the harbingers of summer may look the same. It takes a sharp eye to note how local produce is grown, tracked and promoted in new ways.

As Bruce Nicholas, general manager of the Ontario Food Terminal points out, “The OFT is recovering well from the COVID-19 pandemic and we have noticed that more farmers have returned for the 2022 season as activity in the Farmers’ Market has increased. Farmers continue to adapt to market conditions and make changes to their farming operations to meet the demands of their retail customers.”