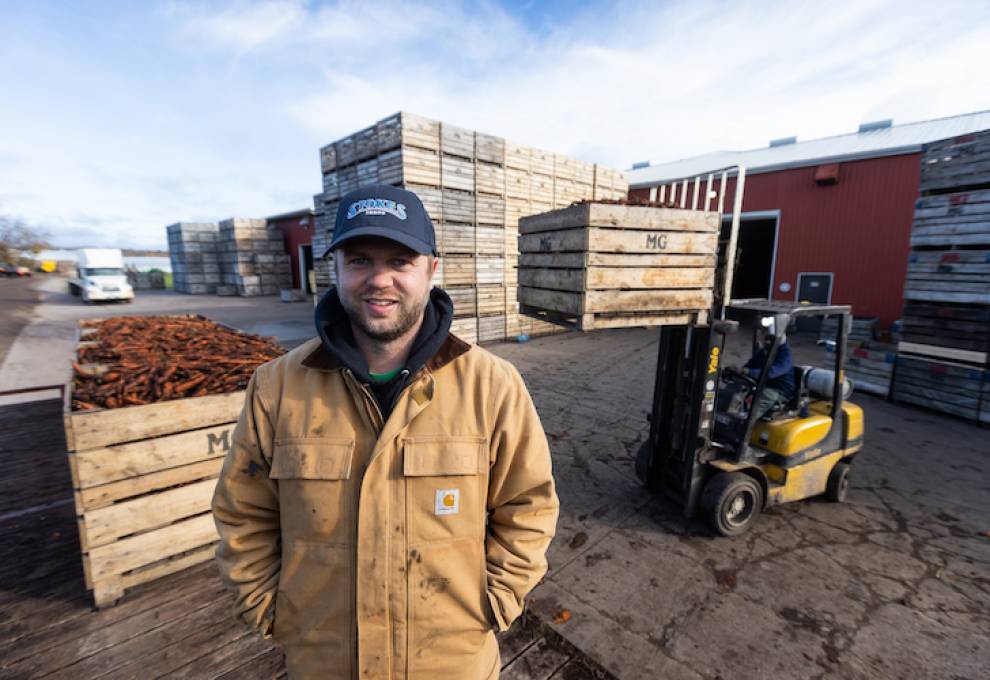 The Canadian Census of Agriculture is a beast of information, its belly ready to be dissected. Tired headlines read that farmers are getting older – and yes, the cohort of farmers aged 55-plus now numbers a high-water mark of 158,790 according to the 2021 statistics. Put another way, 60 per cent of Canadian farmers are in the silver-haired club.

But they are definitely not falling asleep at the wheel. In 2021, Canadian farmers eclipsed the federal export target of $75 billion with a record $82 billion in farmgate sales. Agriculture is being transformed with data-driven insights and automation and Canadian farms are becoming more productive in the process. And although this fact might not be captured in the headlines, farming is increasingly attracting a younger age demographic and female farmers.

Take Chris Sopuch for example. Putting a positive spin on conditions during the pandemic, the 29-year-old came back to farm with his dad Dan at Bradford, Ontario. Sopuch’s undergraduate degree in forestry had stood him in good stead as an employee of one of the largest timber products companies in North America. For several years, he drew on his passion for the land, which included working with ranchers. But in the end, he was drawn back to farm 200 acres of carrots, onions and celery at Marshland Gardens.

“I’m a farmer,” says Sopuch. “I’m a grower, a manager, a plumber, a sprayer – whatever the day demands. Automation is making farming easier, especially with the challenge of accessing labour. We are actively looking at weeding robots in the Holland Marsh.”

With a mobile phone in his pocket, Sopuch literally has the world in his hands. Recent global events – the pandemic and Russia’s invasion of Ukraine – have upended traditional norms of how agricultural inputs are sourced and when they are to be delivered. He’s ordering inputs earlier to pin down prices so that he can forecast his production costs.

“It might mean there’s less money for capital investments,” says Sopuch, “But it’s better to know in advance. I’m in farming for the long haul, so it’s important to look beyond the farm.”

That’s why he was all in to apply for the Advanced Agricultural Leadership Program. He sees the executive program as a gateway to impact the future of agriculture. During the group’s travels throughout Ontario, Washington DC and Louisiana, he notes common themes:  land loss due to urban encroachment, difficulties in accessing labour and ever-rising input costs.

“There’s no simple solution to get paid properly for what we do except to tell our story to consumers,” says Sopuch. “We’re stronger in telling that message through organizations such as the Holland Marsh Growers’ Association.”

He’s not alone in committing to farming. Alison Davie, a potato grower near Taber, Alberta returned to the family farm a decade ago. She, too, spent four years away, but in her case, it was to get an education in New Zealand. Upon return with her husband Michael, she took up the reins to farm 2500 acres of potatoes, timothy hay, seed canola and grains.

Over the years, Davie has worked on improving nutrient use through the 4R practices, which in turn have improved yields. Telemetry has been set up on the irrigation pivots to improve water efficiency and uniform sizing of the 600-acre potato crop.

“The biggest challenge is being young,” Davie shares. “There’s lots of agronomic knowledge to be built, but it also takes time to establish relationships with industry partners.”

Like building soil tilth, it seems a slow organic process, but after several years, she has learned to mitigate risks. She’s strong in agronomy, not so much in mechanics. So she hires the expertise to operate the extensive equipment required for several crops. She also plays a human resources role, managing five full-time employees and two seasonal staff. Not surprisingly, life is most intense during the three weeks of harvest leading up to Thanksgiving.

“With two kids, aged three and six, it’s important to stop for those harvest dinners at the picnic table,” she says. “All the kids are interested in is sitting together at mealtime. They need their mom.”

Davie reaches out through Facebook and Instagram to tell the farm’s story to broader audiences. Through pictures, she’s showing the technology, ongoing crop status, and the labour that goes into bringing food to table. That unvarnished portrayal of 21st-century farm life is also important in attracting service providers. Truckers come to mind.

“There’s an old school of thought about what farming is,” says Davie. “I’m showing that the modern farm is an exciting place to be.”

And for most young farmers, it didn’t take a pandemic to show them that working hard at home is where the heart is.

Submitted by Karen Davidson on 3 October 2022