Canada’s Outstanding Young Farmers: the young and the restless 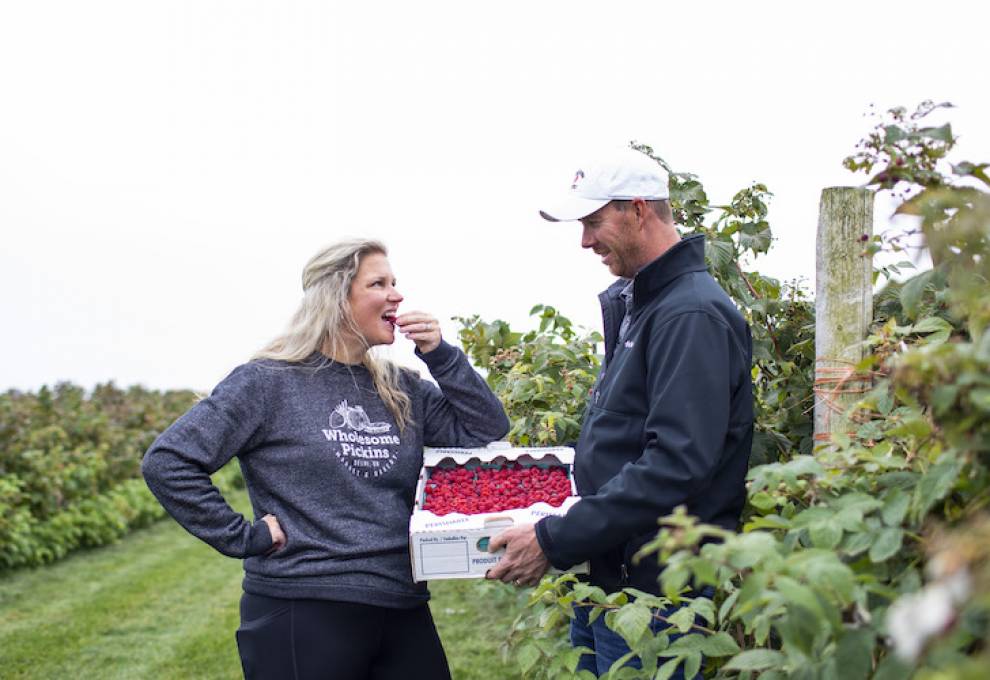 Offered 15 minutes and 30 Powerpoint slides – photos only – how would you tell your business story? For Dave and Jenn VanDeVelde, their journey from tobacco farm to  Wholesome Pickins market and retail bakery is telescoped into one word:  community.

“We’ve been molded and shaped by our community,” says Jenn VanDeVelde, “whether that’s the farmers’ groups we belong to or the suppliers we source from. Dave adds, “We are adamant that our fruits and vegetables come from Norfolk County, Ontario’s garden. And we’re keen to tell the stories of our suppliers. Often they’re within a 10-mile radius.”

The couple are primarily berry growers with 20 acres of strawberries and five acres of raspberries, complemented by asparagus, rhubarb, pumpkins and squash. When they first started, they couldn’t convince consumers to buy blackberries so they pulled out the canes. Tastes and trends change over a decade, so now they’re back in demand. Consumers couldn’t believe, for the longest time, that day-neutral berries could be picked until almost November. The convivial story-telling has been one-on-one.

Over the last decade, consumers have become more aware of what constitutes locally-grown produce. Dave VanDeVelde recalls that consumers would think that if they bought a pineapple in a local store, then it was local. No, that’s an import! Look at the calendar to eat the seasons, know what’s last call and what’s next.

They are one of seven finalists in Canada’s Outstanding Young Farmers Competition (COYF), for farmers aged 18 to 39. One of the requirements is that at least two-thirds of their income must be earned from farming.

“It’s a big challenge to pull together all the financials,” says Dave VanDeVelde. “The judges want to see certain ratios and benchmarks going back to our first accounting year.  In our early years, we actually had better cash flow with rented land and equipment. Now that we have a mortgage and more infrastructure, the numbers look different. But from other contestants, we’ve learned to own our numbers. We have the rationale and background to those numbers.”

“If the barley doesn’t catch, then the kale usually does,” he explains. “Then I plow down the following spring and plant alfalfa or sudan sorghum grass for the next couple years.”

In the spirit of environmental sustainability, they have also planted grassed waterways that flow into the Gulf of St. Lawrence and are in the throes of redesigning water management.

All of these changes have been borne out of farmer networks, of which the most inspiring was in 2016 in Niagara Falls hosted by Farm Management Canada. The Bridging the Gap workshops are geared towards multi-generational farms and pose tough questions. What do you wish you were doing now? What do you want your parents/predecessors to realize you're ready for? These are the conversations that have been essential to Morgan, farming with his dad and uncle.

For her part, Karissa Smallman is a supportive partner, as comfortable grading potatoes for bulk trailers destined for processing as she is ferrying their four children to community or sports events. Her role in the 2022 competition in Saskatoon November 23-27 will be editing and honing the story-telling slides. Morgan has a treasure trove of photos to choose from because he’s been on Twitter for a decade and Instagram more recently.

Since his immigrant parents bought a hobby farm in the early 1990s, the story of Gurpreet and Sharanpreet Lidder has echoed that of many in the Indian community in British Columbia’s tree fruit sector. It started with a small parcel of 15 acres and a roadside stand. Then bit by bit, the acreage grew.

After Gurpreet Lidder obtained a business degree, he worked for a forestry company then came back to the farm on a serious note.

“All I wanted was the lifestyle, working hard in the summer and then more downtime in the winter,” he explains.

Seemingly chance meetings led to bigger opportunities. In 2012, he negotiated until the last moment for a neighbouring 165 acres. With the taste of risk in his throat, he pledged his family’s destiny for this deal.

The purchase opened the door to growing more apples, cherries, peaches, plums and nectarines. A 25,000 square-foot packing facility was built in 2018, and as an ardent participant in the CanadaGAP program, he was able to secure clients in the Lower Mainland. He now supplies major chains such as Loblaw and Sobeys.

“Every challenge is unpreparable,” he says. “We are constantly adapting to mitigate the impacts of flooding, heat waves, forest fires, COVID and even highway closures.”

Lidder’s perspective is that farming isn’t a fallback position. “Some will question if you flunked university and returned to the farm out of failure.”

As Gurpreet and his wife prepare for the final event of Canada’s Outstanding Young Farmers’ competition in Saskatoon – November 23-27 – he reflects on what the future might bring in the Similkameen Valley.

“British Columbia’s tree fruit industry is located on some of the most fertile land. But our sector has fallen from 20,000 to 6,000 acres in the last 20 years. Let’s hope my sons fall in love with the land like I did and carry on.”

Similkameen derives its name from an ancient language that means “creek which cuts its way.” It’s a meaning that describes all of the regional winners in this latest round of Canada’s Outstanding Young Farmers. 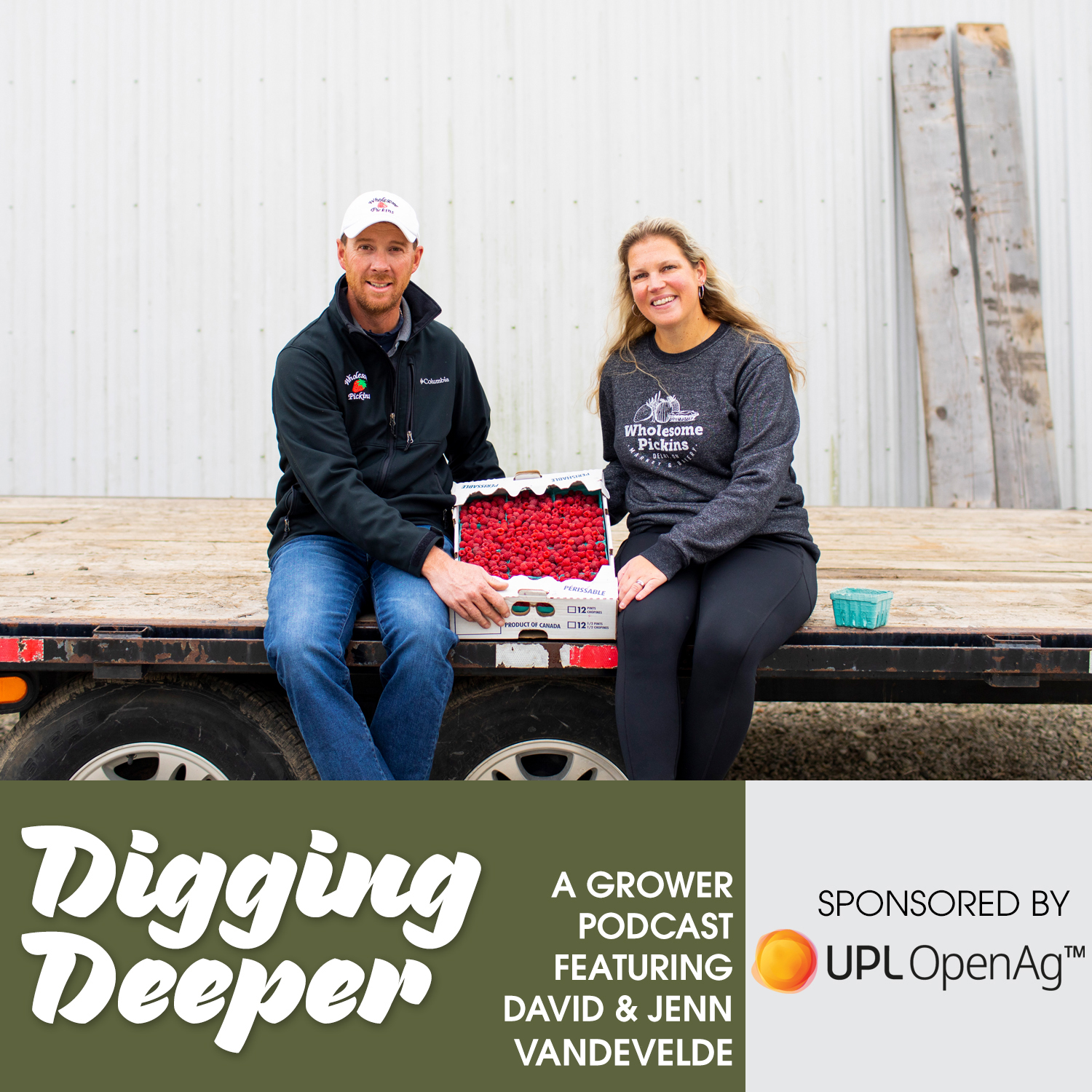 The Grower is “Digging Deeper” with Dave and Jenn VanDeVelde, Wholesome Pickins, Delhi, Ontario. They are one of seven finalists for Canada’s Outstanding Young Competition. Together, they agree that community is a common theme of their 15-minute presentation to the judges. Click to listen to the podcast. Sponsored by UPL.

Submitted by Karen Davidson on 20 November 2022