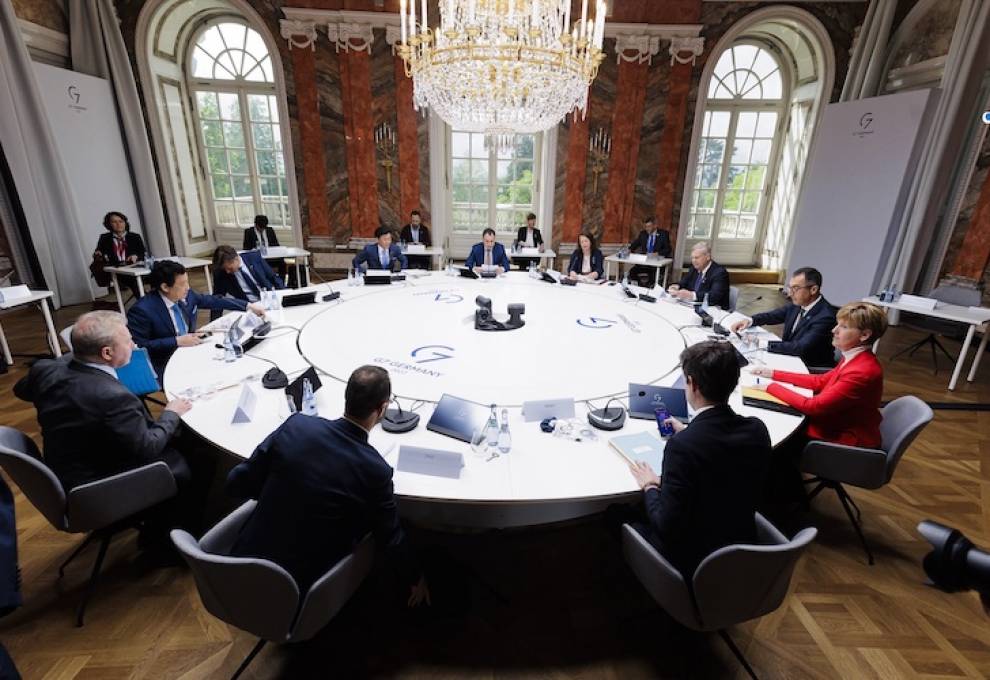 Canada’s Minister of Agriculture and Agri-Food, Marie-Claude Bibeau, meets with other G7 Agriculture Ministers in Stuttgart, Germany. Photo by BMEL/Photothek.
Karen Davidson
-
May 16, 2022

The G7 agriculture ministers met in mid-May in Stuttgart, Germany. While the meeting site was 1,900 kilometres from Kyiv, the war in Ukraine was a common thread throughout.

“This G7 Agriculture Ministers Meeting has reaffirmed our commitment to join forces in the face of global challenges,” says Hon. Marie-Claude Bibeau, Canada’s Minister of Agriculture and Agri-Food. “The pandemic, extreme climate change and the impacts of Russia’s unwarranted attack on Ukraine are undermining food security and driving up prices. The agriculture sector has shown resilience and we will coordinate our efforts to support it, while staying the course on our climate commitments."

While in Germany, the Minister announced Canada’s intent to double its funding to the Agricultural Market Information System (AMIS). This investment will give countries new information about fertilizers, seeds and other inputs to help reduce price volatility, and fight global hunger.

For the first time, Minister Bibeau met the Ukrainian Minister of Agrarian Policy and Food, Mykola Solskyi. The two ministers discussed Russia’s war of aggression on his country and its consequences for Ukraine and global food security. During the meeting, Minister Bibeau reiterated Canada’s commitment to work with the G7 countries to step up efforts to help Ukraine continue its agricultural production for the upcoming harvest season and exporting, including by alternative routes. Minister Bibeau and her G7 colleagues strongly condemned Russia’s actions against Ukraine. Ministers also emphasized their commitment to provide support to ensure the ability of Ukrainian farmers to feed their population and to contribute to global food security.

To date in 2022, Canada has committed $245 million Canadian dollars to support the humanitarian response and meet urgent needs on the ground in Ukraine and neighbouring countries.