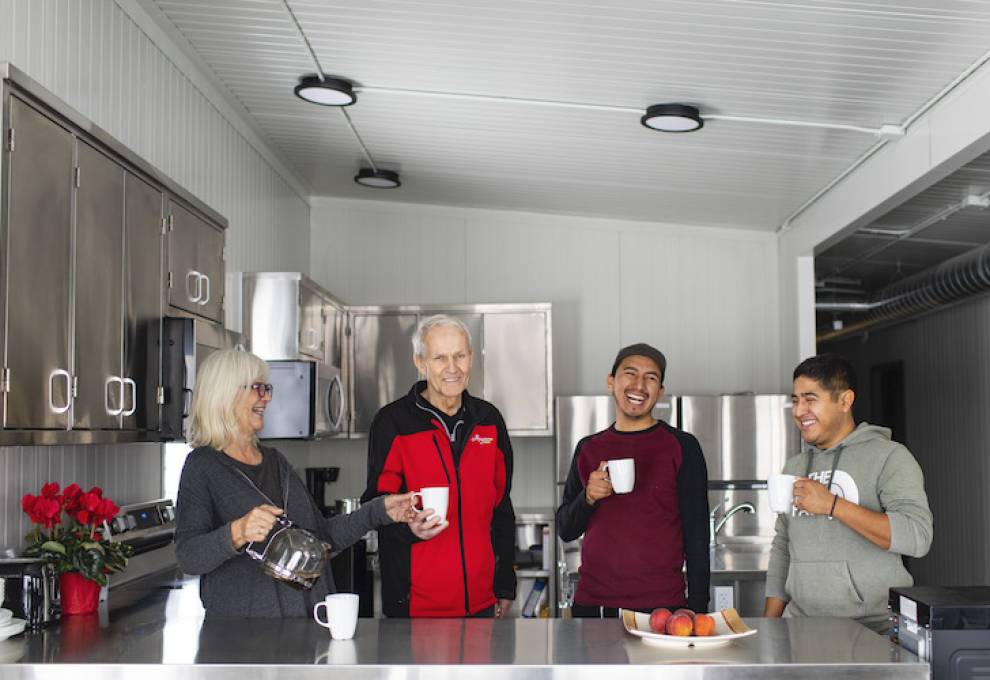 Heated floors. Airy living room with big-screen TV. Stainless steel kitchen. These are a few of the favourite things that Victor Lugo and Eduardo Bautista are enjoying in new living quarters.

They are temporary foreign workers (TFWs), part of the two-year AgStream program, who took up residence the first week of January 2023 at Meyers Fruit Farms, Niagara-on-the-Lake, Ontario.

“I feel like a master chef in this kitchen,” says a grinning Victor Lugo whose favourite dish is chilaquiles – a Mexican tortilla stuffed with green or red salsa, pulled chicken, cheese, refried beans and scrambled eggs. “I love all the tools here and the stainless steel kitchen is easy to clean.”

For Eduardo Bautista, he enjoys the big windows that look out onto peach groves. The two Mexicans are part of a vanguard of workers who are tending the 25 acres of floral greenhouses or pruning 350 acres of peach trees and vineyards.

So far, 2023 has been a go-ahead year after the pandemic revealed that housing needed to properly space a peak number of 80 workers.

“We had to cut back our number of workers by about 15 per cent in 2022 to accommodate spacing needs,” says Aron Hoff, vice-president of production, Meyers. Fruit Farms.  We house workers at a number of different facilities on different farms. But the challenge for us has been the expense of rental space while our needs for labour are growing.”

To meet these business needs, Meyers Fruit Farms contracted a local building company,  Smart Homes Niagara, to construct five 1,904-square-foot houses a year ago. The ambitious goal was to finish by August 2022, but delays in material arrivals pushed the schedule to early 2023.

The results are worth the wait. Steel structural insulated panels provide affordable, comfortable, and energy-efficient housing units for year-round living. They include a combined mudroom/laundry room upon entry at the back of the unit. A long hall, with bedrooms and bathrooms to left and right, leads to the brightly lit kitchen and living area. Stainless steel cupboards and countertops sparkle alongside two of all the major appliances:  stoves, microwaves, refrigerators and sinks. These doubles accommodate cooking by eight people.

“The main challenge in building these houses was to limit the number of people per house so that the 10,000-litre limit was not exceeded in the septic system,” says Hoff. “This was valued advice from other farmers in the area.”

Municipal permits for this type of housing was easy to get in the Niagara region, taking about four to six weeks. But to move ahead with any more construction on this specific property would take up to two years of planning, due to provincial requirements and engineering reports.

“If we decide to build on a separate property, then there will be no problem,” Hoff adds.

Both Meyers and Hoff repeatedly mentioned the ease of cleaning these new properties. There is no housekeeping personnel – as in a hotel – so it’s incumbent for the residents to keep themselves organized.

“We’ve had to rely on temporary relief agencies in the past, and that means training an average of 13 workers per season,” says Hoff. “If we can hire more long-term TFWs, then we don’t have to hire temps. New housing is a way to attract TFWs.”

Elly Hoff, vice-president, human resources and administration, Meyers Fruit Farms, agrees. She’s the go-to person for any concerns that workers have. Interestingly, when plans were being plotted, it was decided to orient the front porches towards the peach groves a few metres away. Little did she know how much she would like the orchard perspective. After all, she is living in one of the units while her fire-ravaged house is being restored.

The Ontario Fruit & Vegetable Convention is hosting a labour session on opening day, February 22. It will be chaired by Stefan Larrass, a senior policy advisor for the Ontario Fruit and Vegetable Growers’ Association. One of those panels will discuss growers’ experiences with building new TFW worker housing in recent years, featuring Hayden Dooney, Suncrest Orchards and Fred Meyers, Meyers Fruit Farms.

As Larrass explains, the COVID years have been a blur when it comes to worker housing rules, but employers don’t always have the luxury of waiting for more predictable rules before investing in new housing for their workers.

“Growers have had to make decisions in somewhat of an information vacuum, while trying to do their best to give workers a nice living space and also keeping costs reasonable,” he says. “This is why we thought it would be helpful for growers to hear from a panel of fellow growers who have gone ahead with these significant investments during the pandemic era.”

When it comes to housing inspections, the federal and provincial frameworks are actually back to being pretty reasonable now that the pandemic has tapered off, says Larrass.  If a grower has issues with inspections, it’s usually because of challenges with local municipal officials who have a say over the approval of the housing (e.g. fire department, building department, local public health unit). Because of this, the housing inspection experience can vary greatly from municipality to municipality.

The timelines for consultations on federal housing standards are in flux. This file has moved in fits and starts since the launch in 2020.

“We do expect more consultations this year since the feds have promised that the draft of the first instalment of housing standards/regulations would be coming out by early 2023, and that this first instalment would be implemented  -- i.e. enacted into law --  by 2024,” says Larrass. “They’ve also signalled they want a second and third instalment of housing regulations in the coming years, so we expect more consultations on that as well.”