Why growers may never reconcile the carbon tax 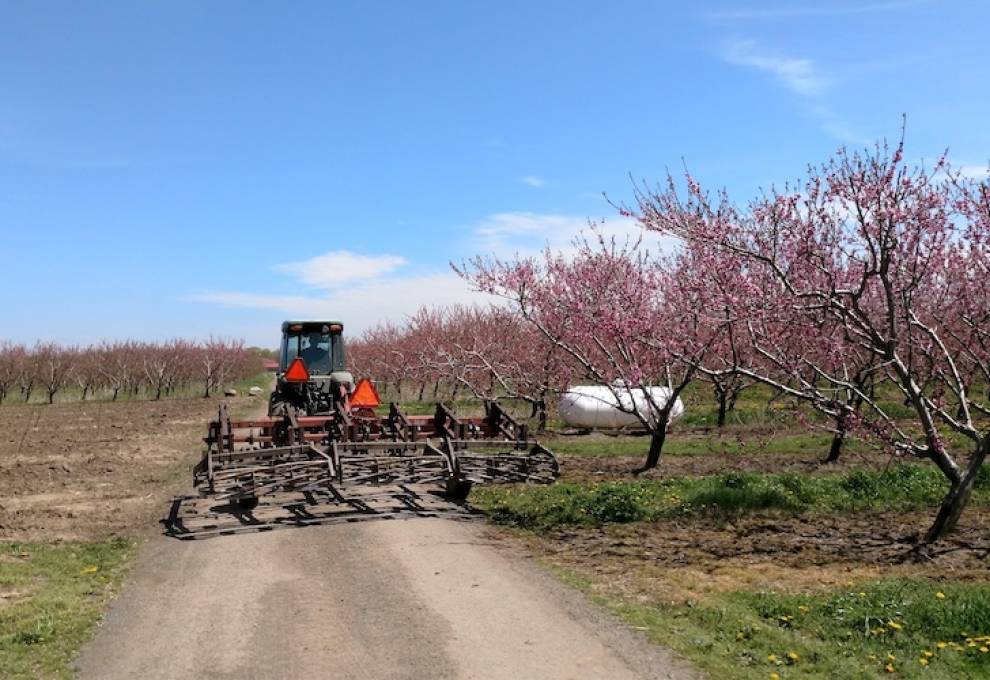 This year’s spring sting is a federal increase in carbon taxes of 11 cents/litre of gasoline and diesel. That’s not welcome news for horticulture which is grappling with disrupted supply chains, spiralling fertilizer costs and higher labour wages. Yet tillage work must continue. This 12-foot wide cultivator, for example, is used in one pass to bury the leftover ‘fruit mummies.’ Used in every other row, the practice reduces disease inoculum in this peach orchard at Tregunno Farms, NOTL, Ontario.
Karen Davidson
-
April 26, 2022

Every rumble of a farm engine now signals higher costs. As of April 1, the federal government added 11 cents/litre for gasoline and diesel, with no exemption for Canadian farmers producing food. It’s a carbon tax that will be ratcheting up by $15/tonne every year until 2030.

“It’s a source of frustration,” says Ken Wall, Sandy Shore Farms, Port Burwell, Ontario. “The real question is whether carbon taxes change the way we as consumers live our lives. The concept of a tax is to change behaviour. The problem for agriculture is that there is no viable alternative to diesel fuel.”

The reality is that the carbon tax stresses margins for everyone up and down the food chain.  As Wall points out, that makes Canadian farmers less competitive against imports. His asparagus competes against Mexican product that had lower input costs before implementation of the tax. And an unwanted perverse outcome quite possibly could be that Canadian farmers decide to downsize or quit operations altogether. The unintended result would be a higher carbon output from more imports being hauled into Canada by boat, plane and truck.

“It’s a non-winning formula,” says Wall. “It’s a tough conversation to have with elected officials and the public. The moment that you say that carbon taxes are hurting agriculture, you are pegged as being anti-environment. And of course, that’s not the case. Farmers are all in for the environment with their care of the soil and water. My fear is that Canada will lose production capacity in horticulture, the ability to grow local food. But it’s a tough argument with the political class and the media commentariat.”

The vast majority of elected officials, both federally and provincially, are urbanites. So, there’s no quick sound bite to explain the farm to plate story of globally interconnected networks. Carbon taxes alone won’t sink agriculture but when layered on top of other, ever-increasing farming costs, they are inarguably detrimental to the spirit of growing food.

Pictures can often paint a thousand bites in telling this story, though. Look no further than the aerial shots of flooding in British Columbia’s Fraser Valley in November 2021.

As Jason Smith, chair of the BC Blueberry Council explains, it may take years to replant and regain the 750 to 1,000 acres of blueberries affected by flooding.  Adding carbon taxes to a sector already stretched by recovery, strikes most BC growers as counter-intuitive.

“Our margins are so thin,” says Smith. “Honestly, we are not getting paid any more money for our fruit than we were 15 years ago yet input costs have more than doubled.”

Stewart Lapage has witnessed the extreme struggles of the food industry firsthand from Calgary, Alberta.  As executive director of operations and logistics for The Oppenheimer Group (Oppy), he’s been in the maelstrom every day, supervising transportation, warehousing, quality control, packaging and storage.

“Food security became a big concern,” he says, recalling the BC floods. “It was really scary for a couple weeks.”

The unprecedented weather event washed out roads, took down rail lines and effectively cut off commercial traffic to the rest of Canada. It was only through concerted industry efforts that alternative routes were created, even moving product under bond through the United States to bring food and goods to and from the BC market.

And the Canadian food complex is by no means “above water” six months later.

“I understand why the carbon tax is there but I question the timing of this most recent increase on top of the natural disaster and all the other complexities in the marketplace,” says Lapage. “With all the price increases, inflation is pushed higher and consumers will be paying more. There is no reprieve in sight for 2022.”

The situation has been worsened by Russia’s invasion of Ukraine and the resultant disruption to international trade routes. Russia and Belarus are big importers of fruits and vegetables, but their usual ports of entry on the Black Sea are closed so deliveries from the southern hemisphere are being diverted elsewhere.

‘That fruit is now looking for a home here in North America, but we’re already backed up at ports,” he says.

At this juncture, the Canadian Produce Marketing Association (CPMA) and Fruit and Vegetable Growers of Canada (FVGC) are taking this complex story to parliamentarians on May 10.  As Shannon Sommerauer, CPMA’s director of government relations explains, “We know that many in the Canadian fresh fruit and vegetable industry have really led the way in terms of adopting more environmentally sustainable practices, and those contributions should be recognized. We have been calling on the federal government to provide better, retroactive recognition for efforts to reduce greenhouse gas emissions and implement more sustainable practices, including when we’re looking at a carbon offset system.”

She adds, “On the front end, we are also calling for all parties to support Bill C-234, which is currently before the House of Commons. That bill would ensure all fuels used for primary agriculture, including for such activities as heating and cooling, are eligible for up-front exemptions under the Greenhouse Gas Pollution Pricing Act, which would help to alleviate costs, maintain food security and support the competitiveness of Canadian growers.”

Their story will be supported in part by a nuanced analysis titled “Carbon Sequestration in Agricultural Soils:  Addressing Canada’s Climate Change Targets” by Dr. Susan Wood-Bohm published by the Canadian Agri-Food Policy Institute. She’s president and CEO of her own consulting firm, and sits on Genome Canada’s Science & Industry Advisory Committee. Her study is a realistic perspective, acknowledging that while Canadian farmers must increase production and at the same time reduce greenhouse gas emissions, the preferred approach strategically however, is soil sequestration.

“Climate change impacts that disrupt the typical moisture cycles, such as through flooding or drought, or increasingly rapid snow melt in the spring may alter the carbon cycle dramatically in the upper soil horizons,” writes Wood-Bohm. “Over time, microbes assist in the movement of soil organic carbon to deeper soil horizons where carbon pools are more stable.”

She’s optimistic that soil sampling methods may underestimate the amount of stored carbon. “This work supports the idea that more carbon may be stored below the agriculturally active layers than previously thought,” she writes.

Farmers willingly take on the task of growing the healthiest, most nutritious food possible, while remaining steadfast in their role as good stewards of the land.

How is it fair that they are carbon-taxed right along with consumers, yet receive no consideration that their land actively sequesters  CO2.?  The final chapter of this story can only deliver a just telling at the tax coffers.

The comments from Ontario…

The comments from Ontario farmers are very misleading. In Ontario we do not pay the Carbon price on diesel fuel used for field use such as tillage etc.. Our fuel delivery companies had everyone sign a form to exempt us from being charged for bulk deliveries of colored diesel. I do not know the status in other provinces. They are correct that energy for heating and cooling and road use continues to include the carbon price. It continues to be important to lobby for exemption for these uses in order to keep producers competitive.

Submitted by Karen Davidson on 26 April 2022