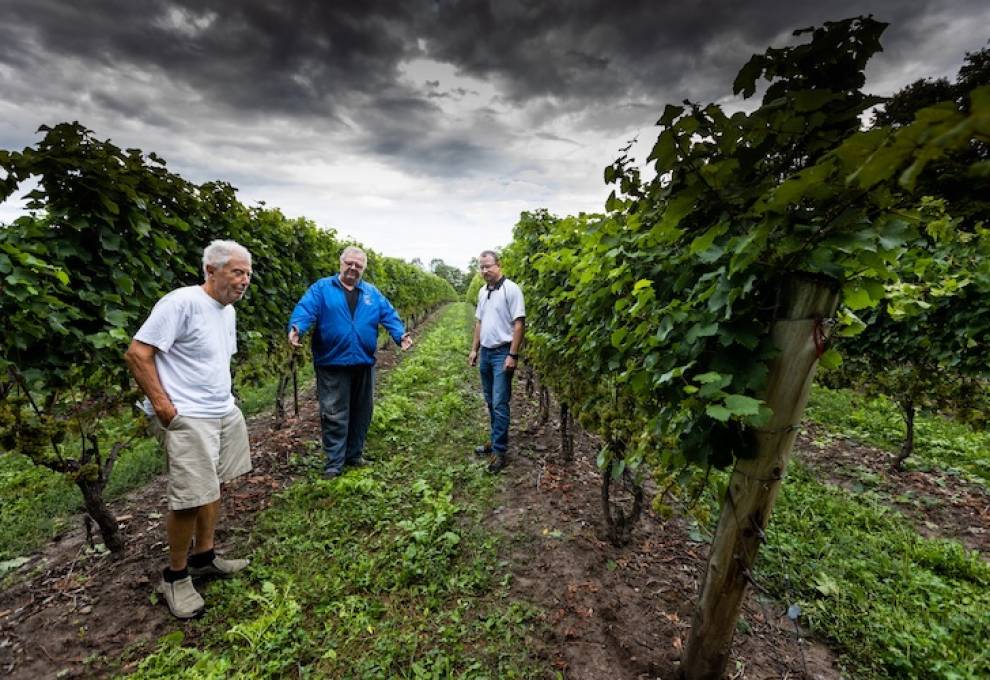 The life expectancy of a vineyard is about 25 years, longer than your dog’s but usually shorter than your neighbour’s.

As Tom Wiley has discovered, the good will of his longtime beekeeper neighbour is priceless. The grape grower with 50 acres under cultivation near Jordan, Ontario, got into the cross hairs of this valued relationship when he used systemic insecticides with unfortunate results in the summer of 2017. The product label warned about toxicity to bees, and this information was shared with his neighbour.

Dennis Edell of D’s Bees Honey is an active hobby beekeeper with 10 to 14 hives and at the time was on the board of directors for the Ontario Beekeepers’ Association, serving as chair of the issues management committee.

The product was sprayed according to label directions, but sadly, Edell discovered dead bees at the doorstep to his hives. He was not amused as he was receiving reports of abnormally high bee losses from beekeepers in proximity to grape growers in the intensively farmed Niagara region.

The story was featured in the November 2018 edition of the Ontario Bee Journal. Edell and his issues management committee were deeply involved in lobbying the Ontario government to limit the widespread use of neonicotinoids. And he had personal experience to share. Imagine the chagrin of Wiley and the immediate need to mend fences.

He turned to Ryan Brewster, a grape and tree fruit agronomist based in St. Catharines, Ontario with a crop consultancy serving about 100 clients in the Niagara peninsula. Wiley was not alone, as he realized other growers were facing similar challenges in controlling pests and diseases.

“The fall-out from pesticide re-evaluations is real,” says Brewster. “There’s a shrinking tool box and farmers have to adapt to new options such as softer chemistries and different cultural practices.”

Going back to 2005, Brewster recalls how the Pest Management Regulatory Agency (PMRA) decided to ban organophosphates. In this category was Parathion and Guthion, products used to control grape berry moth among many other pests. While effective, they had environmental and human health side effects.

As challenging as it was to grow grapes without these products, growers realized that other secondary pests were not being eliminated either.  Soft-scale insects and mealybugs, for example, still continued to cause damage. Mealybugs are detested for the powdery black secretions covering their bodies. Moreover, about 2008, researchers identified mealybugs as vectors for grapevine leafroll virus.

Growers turned to insecticides with systemic modes of action. They are highly effective when timed correctly. But growers need to be scouting for the “crawlers” and time two applications four weeks apart, in June and July.

Brewster put forward a holistic plan to Wiley for the next crop year, starting in late April and early May with intense monitoring for mealybug. The surveillance requires peeling back the bark of trunks to find the “expert hiders.” Two times per week, Brewster or one of his scouts inspect. And when they find populations rising, then summer oils are recommended to mitigate virus transmission and to reduce mealybug populations.

These oil products from suppliers such as Intelligro (Pure Spray) and BioWorks (SuffOil-X) are improved from those of years ago labelled for organic use. They are refined and contain no impurities that might burn the leaves. The products are not labelled for control, but rather suppression.

“The product comes as a pre-emulsified formulation,” he says “making it really simple to prepare and use. When added to the spray tank, the small oil droplets remain in suspension without vigorous agitation. Those small droplets penetrate the canopy better when spraying, leading to more uniform coverage. This translates to improved efficacy and reduces risks of phytotoxicity.”

“The small oil droplets dry quickly, and once dry, have no residual activity,” he continues “and that reduces risks to non-target beneficials. The beauty of this product too, is that it’s effective against powdery mildew.”

Brewster advises the use of summer oils up to four times between bud break and bloom. 2021 was the fourth season that no systemic insecticide was used at the Wiley farm.

“This has become standard practice,” explains Wiley. “I don’t want to kill the bees. If there’s a way to incorporate softer ways of doing things, then let’s do it. My winery, Arterra Wines Canada, likes the idea of what I’m doing. Sustainability is getting bigger all the time.”

Coincidentally, the practice of cover cropping between the vineyard rows, is more attuned to biodiversity and the balance between beneficial insects and the grapes. Wiley has been planting late-flowering clovers and oilseed radish so that spraying regimes don’t interfere with foraging wild bees.

It’s all a question of timing.

“The growers were encouraged to plant white Dutch clover in the alleyways between the grapevines and they attracted foraging bees,” says Edell, commenting on practices before Wiley made changes. “Both honeybees and wild pollinators were killed by the water-soluble systemic insecticide.”

Edell’s point is that more care is needed to understand the ecosystem. He suggests that pesticide applications could be reduced if grape rootstock was certified clean from viruses in the first place.

“Tom has always been a good neighbour,” he continues. “He’s remarkable for his curiosity and willingness to learn. He’s happy to make the cultural changes.”

A wall of majestic maple trees defines the property line between Wiley’s vineyard and Edell’s bee hives. Some nostalgia creeps in with the recollection of Robert Frost’s famous poem, Mending Wall.

There where it is we do not need the wall:

He is all pine and I am apple orchard.

My apple trees will never get across

And eat the cones under his pines, I tell him.

Submitted by Karen Davidson on 28 February 2022